Sam was in his first year of high school and was anxious about leaving home in the mornings, so had started to scratch his arms with scissors. He would become angry if things didn't go well at school and was fighting with classmates. At home, Sam sometimes hit Jack and Rachel was nervous about leaving them alone together out of her sight. Rachel suffers from anxiety and the issues with her children made her feel worse, while her cohabiting partner John was struggling with depression and had recently lost his job.

What help did they get?

Sam was being seen by Child and Adolescent Mental Health Services (CAMHS) who recognised the need for a wider whole family approach. CAMHS approached the local authority and Mary, an intensive family support worker from the Early Help team at the council was assigned to the family.

Mary worked with Sam’s teachers to arrange staff mentors, arranged for Jack to attend counselling at school and John agreed to try talking therapy. Mary helped Rachel think of strategies for supporting the children that the whole family could stick to, such as reward charts, structured quality play time and earlier bedtime routines.

Arguments were frequent between the adults in the home, so Mary began to see Rachel at the library for sessions on her past and current relationships, as well as her strategies for managing conflict between she and John. CAMHS continued their therapy sessions with Sam and Rachel began to join these to talk about Sam's earliest years. He had seen some frightening things done to his mum by his biological dad and the therapist explained to everyone that this may have shaped how Sam related to Rachel and the wider world.

As the positive work progressed, tensions between the adults got worse and one day John told Rachel to leave. Mary and a housing office helped Rachel apply for benefits entitlements in her own name, bid for a house and move in. Furniture, decoration grants and school uniform vouchers were sourced and Rachel spent the summer organising the new home. 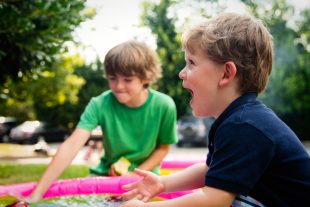 Rachel and John remain separated. Rachel was successful in applying for a part time job with the help of a specialist employment adviser that Mary had referred her to. John continued with therapy and was supported by Mary into a volunteer job with animals.

Rachel attends a weekly women’s support group on relationships and has reflected that she thinks parts of her and John's relationship were controlling and unhealthy. She has stuck to the new routines at home. Rachel also  reports enjoying time with the boys more.

Teachers say Sam has made a small group of friends  and is coping better with school. Sam has stopped scratching his arms and walks away instead of hitting out. Jack is happier at school and more confident around his brother. At times, arguments still happen, but Rachel feels much surer of her parenting and is no longer scared that Sam will hurt himself or Jack.

If you would like to learn more about your local area's work delivering early help through Supporting Families, please contact families.team@communities.gov.uk